Our Girls from the Past 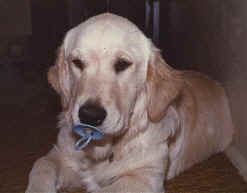 Billie and Marde were our first 2 Goldens and their superb temperaments
were what made us permanently attached to this wonderful breed.

Billie was shown for a period of about 18 months and was 3/4 of the way to her title when we had a break from showing as we had to build our new house.  This gave us most of the "taste/temptation" to keep showing. 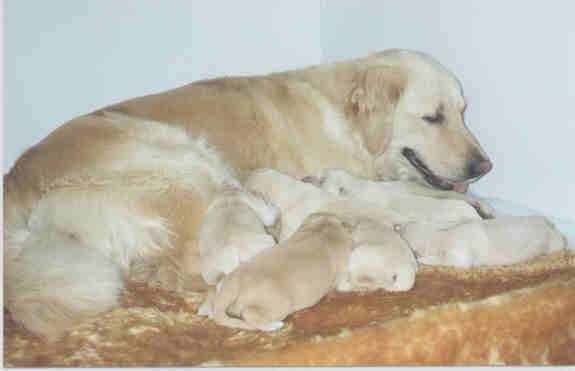 Micky is pictured here with her first litter born in October 1996.  She was a BRILLIANT mother and we are so very happy that she is behind most of our current Goldens and has passed on her superb temperament in particular.

Darling Micky died suddenly on 23/4/2003.  Sadly missed by all at Alnclair and by our friends Ann & Peter Wolstenholme who gave Micky an absolutely wonderful home after she retired from the show ring.  Micky's grand daughter Mimi went to live with Ann & Peter in July 2003 to keep them company, and we know they love Mimi (and spoil her) as much as they loved and spoiled Micky.

Some of Micky's Championship show wins include : 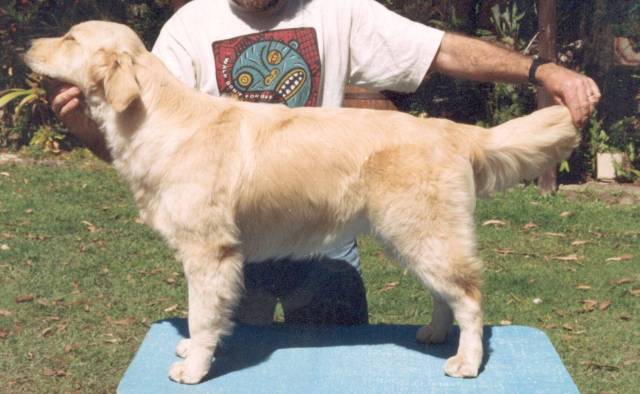 Georgie won her Australian Championship title with ease - she is the mother of our very showy Maggie.  Sadly she went to the "Rainbow Bridge" on 11 January 2006, aged 11 years old.  Missed by all at Alnclair - RIP Georgie and may you live on through Maggie's children & grandchildren. 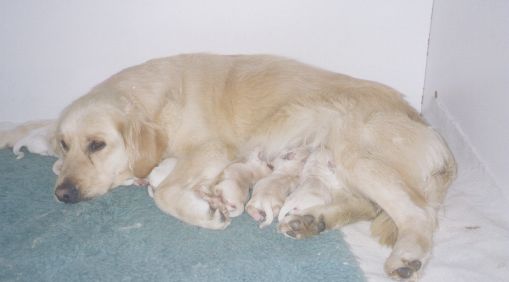 Stevie enjoyed her time in the show ring and easily gained her title.  She changed her "career" in 2000 to have her only litter which produced our lovable "terrible twins" Annie and Ricky who themselves have gone on to gain their own titles and have some super wins along the way.

Stevie moved to Tamworth in early 2002 and enjoyed a wonderful carefree life with all the family members, both 2-legged and 4-legged. She left us to replace an older Golden who had died and filled that gap with tremendous ease.  Stevie lived to just short of her 15 and a quarter birthday and will be sorely missed by her human family. For her original family at Alnclair we will never forget her either.  She only had one litter and we currently have great great grand children to continue on in her memory.  Rest in Peace darling girl.

Some of Stevie's Championship show wins include :

Mimi is a quiet little achiever who proved herself to be an excellent first time mum.  She won many class in group awards and was over one-third of the way to her Australian title (from only 2 "challenge wins") when she moved to the "big smoke".  Mimi is our Gaby's mother who also did well in her limited showing career and Gaby is a great mum herself.  Mimi is pictured above aged 7 at one of her various training grounds.
Mimi now lives with Ann and Peter Wolstenholme who share a wonderful life with her. They tell us all the time how very happy she is there and how much admired she is by family and friends. We miss her brilliant contribution to the compatibility in our yard, but she deserves to receive 100% attention, and as she is Micky's grand daughter she is extra special to Ann & Peter.
Sadly Mimi crossed the Rainbow Bridge on Thursday 11 December 2014 following a brief and sudden decline in health.  Loved and adored by both her human families - Rest In Peace darling girl.

Some of Mimi's Championship show wins include:

Alnclair Geisha Girl
(litter sister to our Bobby and Missy)

Mia is owned by a friend and she was awarded Baby Puppy in Show under a UK Breed Specialist Judge at the Golden Retriever Club of NSW's Championship show in September 2002 at her first Golden Retriever Specialty Show.  Mia also had numerous class in Group wins as well as challenges at a young age.

What some of the Judges have said about Mia

No critique for this result 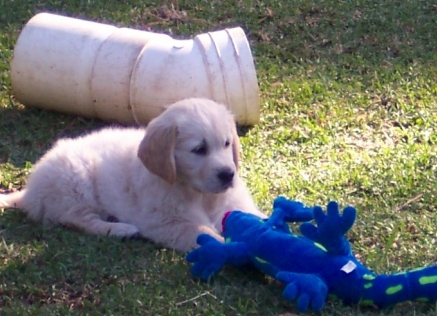 See young Charlotte playing with her favourite toy when aged 8 weeks old.  Charlotte lives with Di Nolan and her lovely family, and she has decided she much prefers to be a full-time much-loved pet and has given away showing.

What some of the Judges have said about Charlotte:

Missy is another "Golden child" who is an absolute delight to live with, and was an EXCELLENT mother.  As Missy's dream "job" was always to be a full time house dog she also lives now with the Elliott family. The only competition Missy enters anymore is against her brother Bobby - for first place on the lounge!

Rest in Peace darling girl who gained her angel wings on Saturday 8 August 2015 - leaving a huge hole in the hearts of the Elliotts.

Some of Missy 's Championship show wins include :