Maggie made us very proud by becoming a GRAND CHAMPION on 15 November 2003 - Maggie is from only the 3rd litter we have bred.  Maggie achieved this wonderful accomplishment with style and at a steady pace as she had been out of the show ring for nearly 18 months with maternal duties.  If the "Supreme Champion" title was available when she was showing she would have won it with ease.

Maggie was the ultimate show girl.  She was a multi BOB, BIG, BIS and RUBIS winner at "All Breeds" shows on top of regularly being "on the pegs" at Specialty Show level, including BISS & R/U BISS.  Maggie was a real performer at home too, keeping us highly amused with her antics - we did think of entering her in "Funniest Home Videos"!

Maggie is  proudly owned, bred and deeply loved by us both.

Very sadly we had to say goodbye to our darling girl on Saturday 13 April 2013 at 10am - she lives on through 6 generations and we will never forget her here at "Alnclair".

Maggie & Ricky above on the lounge in mid December 2010 - my Olden Golden bookends.  In this photo Maggie is nearly 13years old and Ricky is over 10 years old.

See Maggie above left sharing the lounge with her great-grand-daughter Gracie - January 2010.

What a VERY special date!  Miss Maggie celebrates her 15th birthday - we love you darling!

What some of the Judges have said about our Maggie:

"A lovely 11 1/2 year old bitch who is starting to show her age and unlucky to meet the winner here today.  Strong bitch in excellent condition.  Feminine well balanced head with soft pleasing expression.  Adequate front and rear angulation, moved truly but did not have the reach and drive today as the first placegetter."

"This young 10 year old looked a picture and enjoyed every moment of her time in the ring.  Pretty, well chiselled head, good reach of neck, well set on to correctly angled shoulders.  Dead level topline on the stack and when moving.  My reserve bitch CC winner.

(Two great ladies of the breed, a credit to their owners and breeders.)"

"Lovely older girl with beautiful coat.  Would prefer more angulation in the front and a stronger head, but she has a lovely expression and moves very well."

No critique available for this show

"Quality pale bitch, well made and muscled. Loved her feminine head with its gentle golden expression. Pleasing balanced outline with sturdy rear quarters. Never stopped showing, just had to give way to 1 today."

"A nice bitch with a good free stride going around the ring."

"Feminine head with good expression, moves well for age, not in coat."

General critique for the veteran classes at this show stated "All of the veterans carried their ages very well, full of quality and moved well."

"This young lady was 7 1/2 years old.  She was very feminine with a soft and gentle head, sweet expression.  Nicely put together and not overdone in any way.  Presented a very pleasing picture.  Sadly today she did not have her best bib and tucker on so had to give way to the winner."

"No doubt one of the best movers of the day showing no sign of slowing down at seven years.  Very feminine all through.  So much work in her head.  Carrying just the right amount of weight.  Lovely type full of quality."

"Very nice mover, pleasant bitch, good topline, held herself together very well when she moves around. Both the CC and RESERVE CC were very beautiful smooth movers on this day. Typey and elegant, perfect Golden Retrievers."

No critique available for this show. 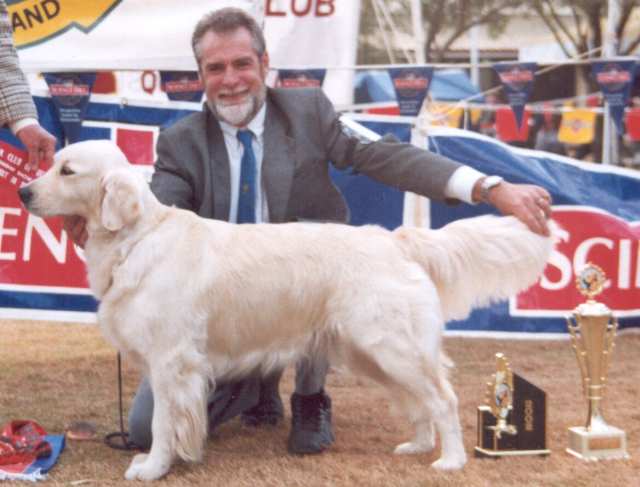 No critique available for this show.

"Well made quality youngster who was one of the best movers in the class.  Gentle head.  Good neck.  Excellent bone and substance.  Level topline with well made quarters - shows promise."